The Michelin star award winners for Tokyo 2021 were announced this year via a pre-recorded video streamed on YouTube on Monday 7th December at 2pm Japan time. YouTube reported a peak of 876 watching live. You can watch a replay here.

In this post we present the full list of Michelin starred restaurants in the 2021 Guide; discuss promotions, demotions and deletions and compare Michelin with Tabelog.

The Michelin Guide is a 100-year institution in France and is still seen as the pinnacle of culinary achievement to many chefs. The first Michelin Guide to cover a part of Asia was the 2008 Tokyo Guide with Tokyo famously being awarded more Michelin starred restaurants than any other city in the world. Michelin divided opinion inside and outside Japan, but the original publication was a runaway commercial success and The Guide really did help to open up fine dining in Japan to the world.

Michelin has always operated a little differently in Japan compared with Europe. Firstly, whereas the European Michelin guides cover an entire country, Michelin produces separate guides for selected parts of Japan. Secondly, in Europe, Guides are always announced with a press release containing the full list of starred restaurants with breakouts for promotions, demotions and deletions. But in Japan, demotions and deletions are never broken out. Last year, Sushi Saito and Sukiyabashi Jiro Honten were famously delisted. This wasn't because the quality of these restaurants suddenly fell off a cliff but is instead for two reasons: (1) Michelin doesn't list introduction-only or members-only restaurants and (2) unlike in other countries, chefs can ask not to be listed. None of this is a secret and chefs will openly talk about the fact they asked not to be listed so the only reason Michelin doesn't list deletions and demotions can be is to save the chef's face. Additionally, it seems like chefs can request to be held at 1 star and not be further promoted. Why would any chef refuse Michelin stars? Well the top sushi restaurants are fully booked for months ahead so they just don't need or want more attention. Moreover, I'm not sure how many Japanese chefs actually realize the Japan Guides are no longer printed in English but there is surely still a perception that inclusion in Michelin will generate more overseas interest, which the restaurant might not be catered for and while you can't really limit your Tabelog rating it seems you can limit your listing in Michelin. Finally, Michelin doesn't have the lineage it has in France and as was reported back in 2007, some chefs just don't respect it.

Tabelog has become the leading directory of restaurants in Japan, even launching its own awards in recent years. So with a continually-updated local guide having no limit on coverage and offering transparency; and due to the fact that so many of Tokyo's top restaurants, particularly sushi restaurants, are not even in The Guide, Michelin has become less relevant to Japan and doesn't have the same authority it does in other countries. That said, it still generates a lot of interest from chefs, foodies and the media, it's a great way for new restaurants to get themselves noticed and I think it's still a useful guide to French fine dining with comparatively more coverage of French and the top French restaurants.

So let's look at the 2021 Guide in detail. You can see the official list of restaurants online but the table below has the full list of starred restaurants with breakouts for promotions, demotions and deletions. Included is the Tabelog rating as at 7th December 2020, a link to the restaurant's Tabelog page and any 2020 Tabelog Award designation. 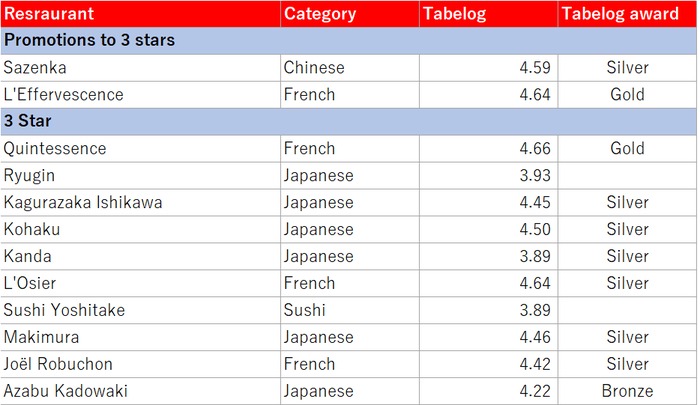 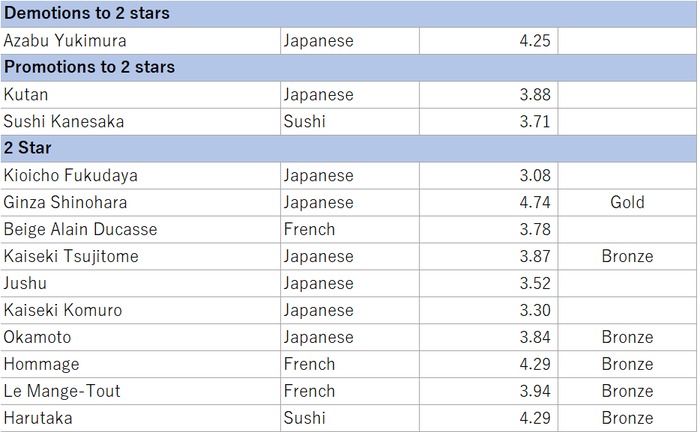 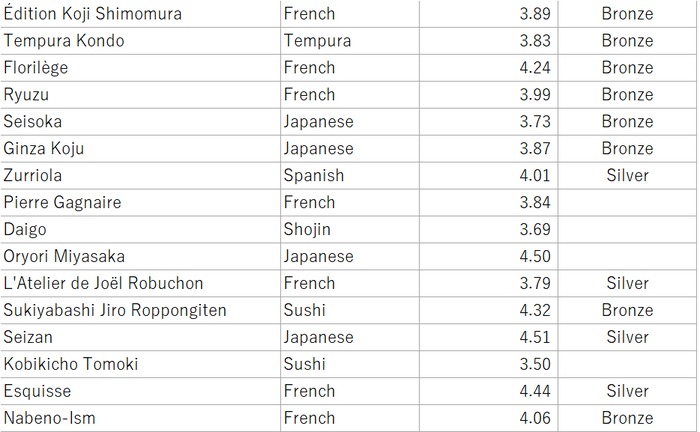 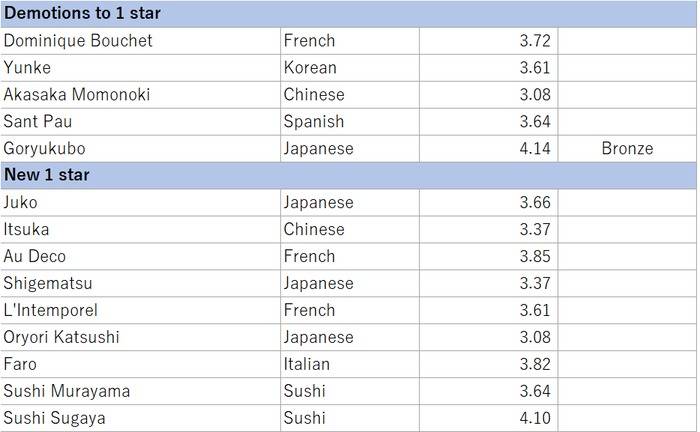 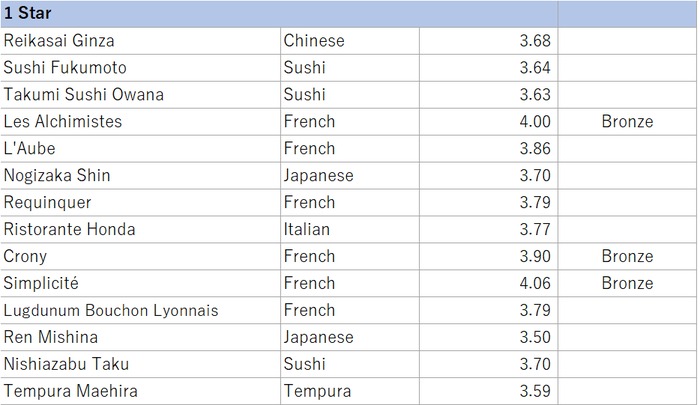 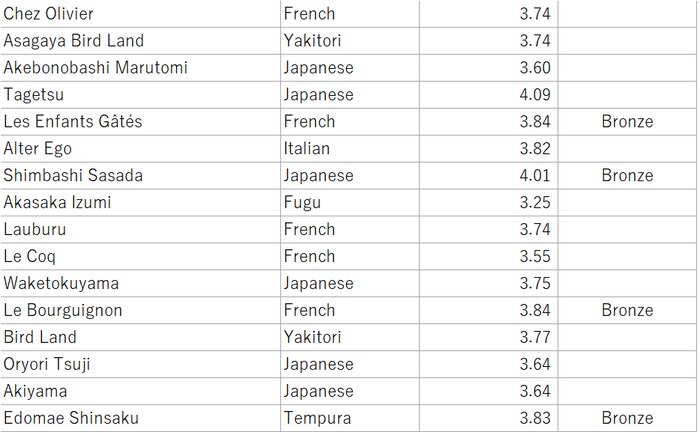 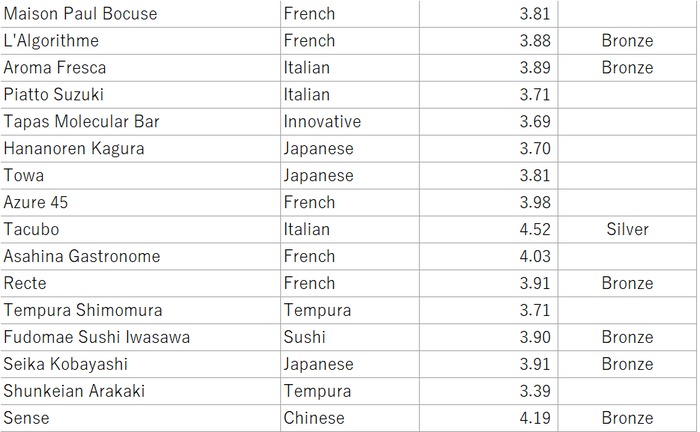 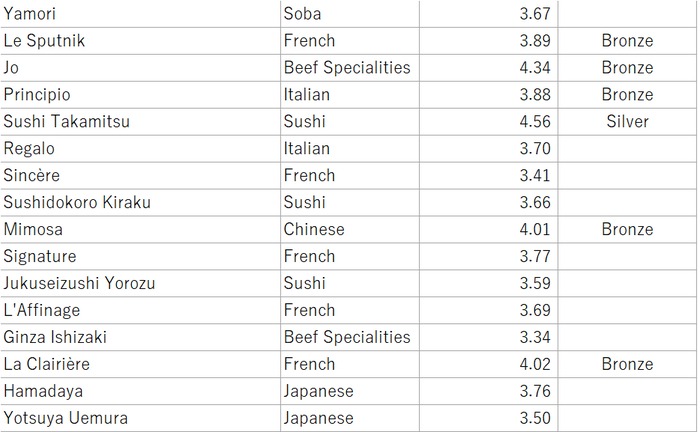 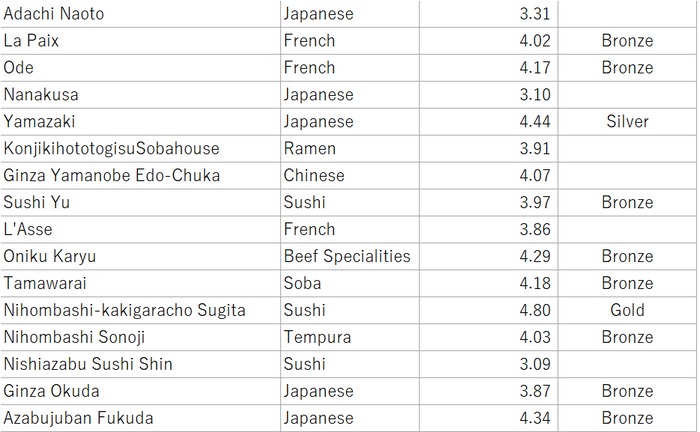 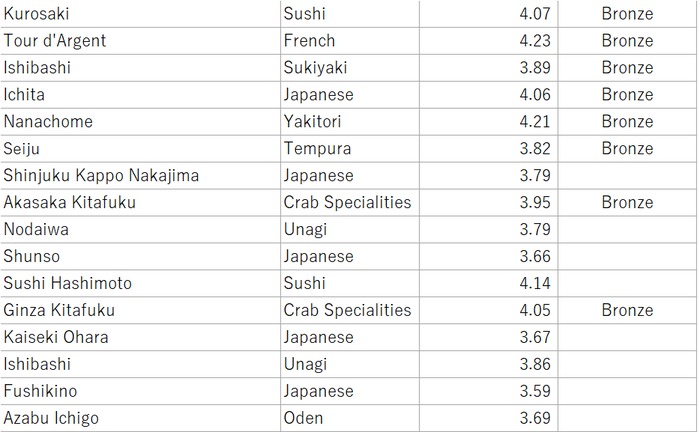 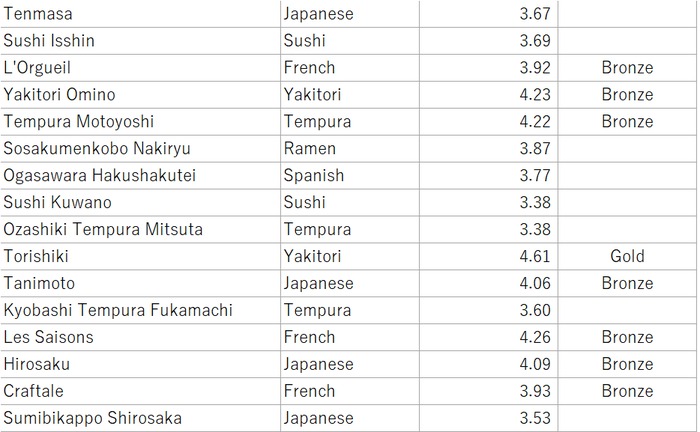 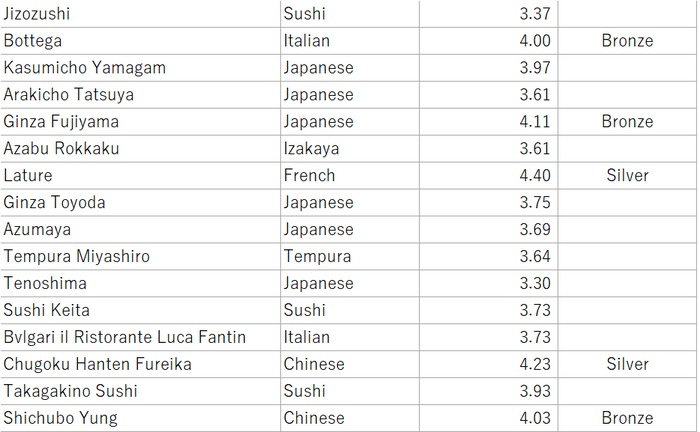 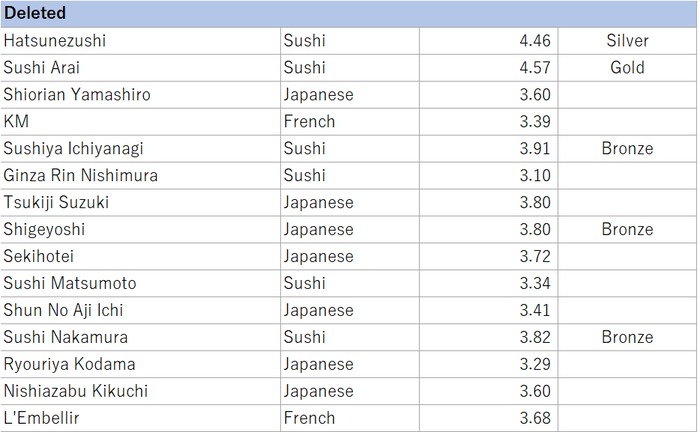 This year Michelin introduced a "Green Star" for restaurants with outstanding commitment to sustainability. The first recipients of this award are Quintessence, Floriege, Narisawa, Sincere, Lature and L'Effervescence.

L'Effervescence and Sazenka were promoted to 3-star. Tabelog has ranked L'Effervescence in the top 5 French for the whole of Japan for many years now. Like many restaurants, L'Effervescence closed for a period due to coronavirus and when it re-opened they took the decision to stop the cheaper lunch menus and offer only a single menu for lunch and dinner at an increased price of JPY 28,000 - a strategy that has evidently paid off.

Despite Tabelog rankings below 4 and no awards for 2020, Ryugin, Kanda and Yoshitake cling on to their 3 stars. Yoshitake remains the only 3-star sushi restaurant in Tokyo.

Yukimura, which was promoted to 3 stars in 2010 was demoted to 2 stars.

Kutan and Kanesaka (which previously held two stars from 2008 through 2012) are promoted to 2 stars though no Tabelog award for either this year. Fukudaya is the lowest-ranked 2-star restaurant with a score of just 3.08.

The highest-ranked 2-star restaurants are Shinohara and Amamoto and ones to watch for promotion to 3-star in coming years, assuming the chefs really want the extra attention. I wonder who thinks Yoshitake is a better sushi restaurant than Amamoto?

5 restaurants are demoted to 1-star. Hatsunezushi, which held two stars since 2009, even while it was closed in 2018, has been deleted. Nakaji-san isn't exactly afraid of publicity so this deletion is a mystery.

18 restaurants receive their first star. Sushi Sugaya, Hato, Onarimon Haru, and ShinoiS are probably the 'hottest' restaurants on the list, all only having opened within the last two years and quickly rising the Tabelog rankings. Special mention to Sushiya Shota which is one of my favourite sushi restaurants. None of the new 1-star restaurants received a Tabelog award this year. Makiyaki Ginza Onodera is the lowest-ranked 1-star restaurant with a score of just 3.06.


Sugita and Torishiki are the highest-rated 1-star restaurants, both having received Gold awards for the last 4 years. Most people wouldn't argue with Sugita's rating as the number one sushi restaurant in Tokyo (and currently the number one restaurant in Japan, though that accolade could generate a lot of debate) so surely Sugita-san has asked them not to promote him? As for Torishiki, I can only imagine Michelin don't deem yakitori 'worth a detour' or a 'special journey'.

Tacubo, Takamitsu, Yamazaki, Lature and Chugoku Hanten Fureika are the next-most highly-rated 1-stars having Silver awards this year. Given that neither of the two-star promotions this year have particularly high ratings it's hard to guess which restaurants might be promoted next year.

We've seen that there can be big differences between the number of Michelin stars and Tabelog ratings but how much coverage does Michelin have of the top-rated Tabelog restaurants at all?

On Wednesday 9th December 2020 Tabelog had 128,942 listings for Tokyo. The table below shows the percentage of listings in Tabelog that have a Michelin star for the top 3 types of cuisine. If we assume that there isn't a disproportionate number of poor restaurants in any one category this proves that Michelin has much better coverage of French restaurants than sushi restaurants.

Looking for Michelin starred restaurants in the Tabelog top 20 in each category, we can again see again that French restaurants have good coverage, particularly at the very top and most of the top 20 sushi restaurants are not listed.

It's notable that The Guide doesn't contain a single yakiniku restaurant. The fact that at most yakiniku restaurants you have to cook the food yourself most likely disqualifies them from inclusion but that's not always the case and either way it's a glaring omission of an important part of Japanese dining culture.

It's been a terrible year for many people and particularly restaurant businesses but the Michelin awards are a moment to celebrate success so congratulations to this year's Michelin winners and thanks to everyone who works in the restaurant business. With a vaccine coming, the Olympics and Japan, hopefully, re-opening to tourists, let's look forward to a better year in 2021 and more fine dining.

What are your thoughts on this year's Michelin guide? Leave a comment below!

The Tokyo Gourmet is a long-term Tokyo resident. I hope my unvarnished opinions on the best (and most disappointing) dining in Tokyo help you to decide where best to spend your cash.
https://thetokyogourmet.blogspot.com/.

Does anyone have any idea as to why Hatsunezushi lost their stars?

I haven't heard anything about a change in style or a drop in quality, so it's a mystery to me why Hatsune suddenly lost its stars.

While restaurants are being asked to close by 8pm, Hatsunezushi is running a special 1-hour course starting at 7pm. For 27,500 you get "12 pieces of sushi and a chirashi don to take home". I can only find one review so far at https://www.instagram.com/p/CJ8gwc-B24H/ and https://www.instagram.com/p/CJ9uAHzBf3N/ so I'd say it's more like around 9 pieces of sushi plus kanpyo and tamago but the pics suggest there's no compromise in quality and given the last 30 minutes of a normal 2-hour meal at Hatsune is taken up with dessert and coffee this looks like a great chance to eat there for half the normal price. Book at https://www.tablecheck.com/shops/hatsunezushi/reserve?menu_lists[]=5ea642235f6ddfd76c00d3b8 or via OMAKASE.

Just published my review of Hatsunezushi at https://thetokyogourmet.blogspot.com/2021/02/hatsunezushi.html. In short, while there might have been a drop in value over the years there hasn't been a drop in quality. I asked Nakaji-san what happened with Michelin and he said he didn't know.

Thank you so much for assembling this! By the way, you say, "You can see the official list of restaurants online," however the link I always used to use (https://gm.gnavi.co.jp/restaurant/list/tokyo) now includes all Michelin starred locations in Japan except Tokyo. I cannot find the "official" Michelin list anywhere. Do you happen to have the new link?
Thanks again!

Yes, sorry, the link got lost in the publishing of this article. It's https://guide.michelin.com/jp/en/tokyo-region/tokyo/restaurants. The Tokyo, Kyoto & Osaka Michelin Guides were removed from gnavi some time last year. Interestingly, they did add the 2021 Okayama Guide which was published after Tokyo 2021.

Thanks so much for spending the time and putting this together, so much easier to read and the summary/analysis is well prepared!

I'm especially happy for L'Effervescence as I had a spectacular meal there last year that I felt was much more satisfactory than say, Narisawa (which was very decent for what they did before but it's a different experience).With the recent remodel and now the awards, the cost of the meal will surely increase, but if I look at comparative values to overseas, I would say it is better than many California Michelin restaurant pricing.

I wonder if the restaurants that no longer have any stars (but did so previously), if they will be a bit easier to book?

Ranjatai probably isn’t included since they are closing this year.

Thanks for the detailed analysis, quite well done! Couple of observation:

It is interesting to compare Tabelog ratings. However I am always wondering how meaningful tabelog aggregated ratings can be. For instance, there are many excellent sushi restaurants, often discussed on this website, that have "low" score, although all reviewers provide 4+ scores. My point being, a restaurant may seem "low" on Tabelog despite having all reviews raving about it, including top-famous food bloggers. I'm very curious about the way tabelog scores are calculated and hope it can be a subject for a next discussion!

Btw, I do not think Yakiniku are disqualified because you cook yourself. Most high-end Yakiniku grill the meat for patrons. Also, there are cases of Yakiniku places being awarded stars - for instance Kanpai Classic in Shanghai has held one star for a few years.

Thanks for the comment. I just can't explain why yakitori restaurants are included but not yakiniku. Regarding Tabelog scores, the overall score takes into account the number of reviews and reputation of the reviewers, so people can't just come along create an artificially high score for a restaurant. Agree, this would be a good future topic!

The 15 Best Sushi Restaurants for Lunch in Tokyo