Karubi, rosu, hire, momo....
Yakiniku uses a variety of cuts of meat, and many people go into a meal of yakiniku not knowing what cuts or parts they are eating.
This article will introduce the most common beef cuts and organs (offal) used in Japan's yakiniku restaurants.
Your visit to a yakiniku restaurant is sure to be even more interesting if you're aware of what each cut is before going in!
Be sure to give this article a read! 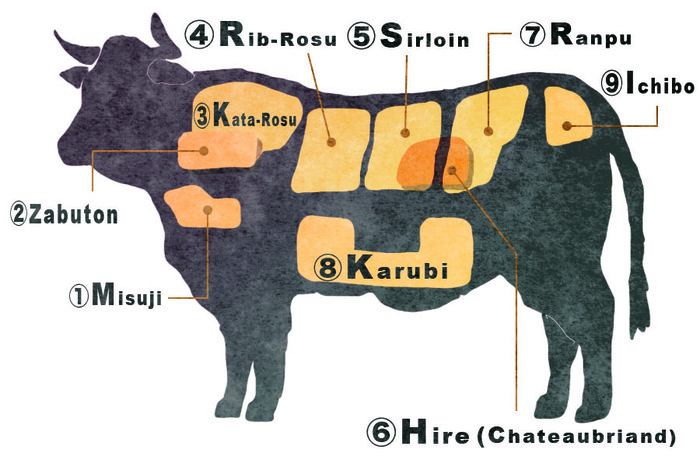 ①Misuji（Top Blade Muscle・ミスジ)
Only around 2kg of this rare cut can be gotten from each head of cattle. The meat comes in a small, leaf-like shape, and it's beautifully marbled. This is a melt-in-your-mouth cut, and you can thoroughly enjoy the sweetness and flavor of the meat.

②Zabuton（Chuck Flap・サブトン)
Zabuton is the central portion of the kata-rosu (chuck eye roll). Only around 3-4kg of this valuable cut can be gotten from each head of cattle. Zabuton is said to be the cut with "the best marbling" among cuts of wagyu beef. It is exceptionally tender, and it can be used in beef sashimi and as a sushi topping.

③Kata-Rosu（Chuck Eye Roll/Chuck Roll・ロース)
This is one of the largest cuts of beef used for yakiniku. It has moderate marbling and a good flavor. It has a fine grain and deep umami flavor, so it's the optimal cut to slice thinly for use in yakiniku and sukiyaki.

④Rib-Rosu（Spencer Roll・リブロース）
This cut comes from the thickest part of the longest chest muscle. It tends to be well-marbled and has a fine grain. The meat has a light yet rich umami flavor. It is well-suited for being used in steaks, sukiyaki, and shabu-shabu.

⑤Sirloin（サーロイン）
This cut stretches from the rib-rosu to the cow's thigh. Sirloin has a slight sweetness to it, and it's characterized by its abundant juicy marbling. Supposedly this cut got its name because it was so delicious that they wanted to give it the title of "sir." Sirloin is well-suited for steaks, shabu-shabu, sukiyaki, and yakiniku.

⑥Hire・Chateaubriand（ヒレ・シャトーブリアン）
This thin and long cut is located within the sirloin cut, along the cow's spine. It is an extremely tender cut, and it is characterized by its leanness and refined flavor. It is a rare cut that makes up only about 3% of the usable meat from a cow, making it a high-end cut ranked alongside sirloin and rosu.

⑦Ranpu（Sirloin butt・ランプ）
This cut is connected to the end of the sirloin. It is a large section of lean meat that runs from the cow's hips to its rear, and the meat is tender and flavorful with a fine grain. This is one of the most sought-after lean cuts. High-quality portions of this cut are also used for dishes like yukhoe (a Korean dish of seasoned raw beef topped with an egg yolk).

⑧Karubi（Boneless Short Rib; Kalbi・カルビ）
This cut comes from around the abdominal bones. The word "kalbi" is Korean for "the meat between the abdominal bones." It tends to be well-marbled and has a rich flavor. The sweet umami and aroma from the fat is what this cut is prized for. Karubi is one of the most popular and iconic options at yakiniku restaurants.

⑨Ichibo（Aitchbone; Round・イチボ）
This rare cut is found at the tip of the cow's buttocks. Only a small amount can be acquired from each head of cattle, making it valuable. It is the preferred cut of connoisseurs, as it combines the sweetness of marbled fat with the umami flavor of lean meat. There is a fair amount of chew to this cut, so there's a really enjoyable amount of meaty texture. Ichibo can both be cooked or eaten as sashimi. 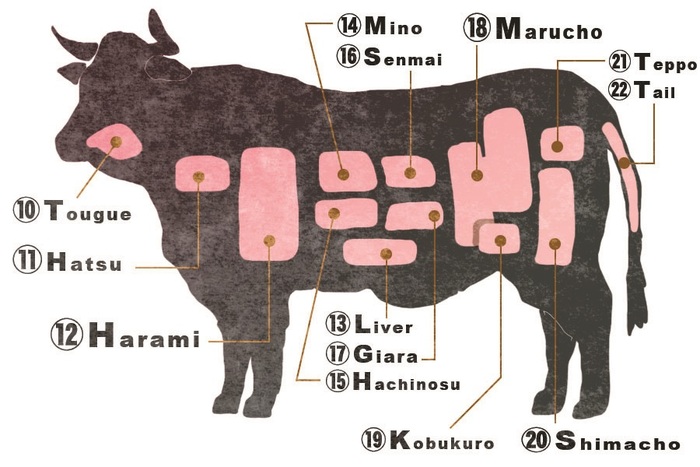 ⑩Tongue（タン）
As you would expect, this cut comes from the cow's tongue. The root of the tongue (tan-moto) is relatively fatty and has a good amount of marbling, making it very tender. Particularly fresh tongue can be sliced and enjoyed raw as sashimi. Tongue is a common part used in yakiniku. Additionally, if you slowly simmer tongue it becomes incredibly tender and develops a unique flavor, so it is also used in making tongue stew.

⑪Hatsu（Heart・ハツ）
This cut is taken from the heart of the cow. As there is little muscle fiber hatsu is very tender, has little odor, and is not particularly fatty, so it is often eaten as sashimi. It is very high in vitamin B1, which helps with fatigue, and B12, which helps with anemia and insomnia.

⑫Harami（Outer Skirt・ハラミ）
This cut comes from the diaphragm muscle. The portion of this cut that is in contact with the lumbar vertebrae is called "sagari" and is particularly delicious. Harami is technically classified as horumon, but it has a texture very similar to lean meat. It is tender and contains a good amount of fat, giving it a deep flavor.

⑬Liver（レバー）
Liver is used in a wide variety of dishes, and it is the most popular and most commonly used type of horumon. Liver contains high amounts of iron, earning it the nickname "iron treasure-trove."

⑭Mino（Rumen・ミノ）
This cut is taken from the cow's first stomach. It is fairly thick and is almost pure white, and it is characterized by its texture and mild flavor. The rumen is called "mino" because of its similar shape to a type of Japanese umbrella called "mino-kasa." Mino has less of an odor than many other types of horumon, so it is well-suited for uses in yakiniku and as sashimi.

⑮Hachinosu（Reticulum・ハチノス）
This cut is taken from the cow's second stomach. It shares a name with the Japanese word for "beehive" thanks to its similar appearance. It is also called "trippa" in Italian. Hachinosu is also delicious served stir-fried or simmered.

⑯Senmai（Omasum・センマイ）
This cut is taken from the cow's third stomach. Whether cooked or eaten raw, senmai has a chewy texture. It is low in fat content, but is instead rich in iron and zinc.

⑰Giara（Abomasum・ギアラ）
This cut is taken from the cow's fourth stomach. It has a firm texture and rich flavor, and it is characterized by the sweetness of its fat content. Whether eaten cooked or simmered, it is a delicious cut.

⑲Kobukuro（Uterus・コブクロ）
Kobukuro is a cut taken from the cow's uterus. It has a clean, refreshing flavor and a pleasantly crisp texture. You can eat it grilled, but it is also often served in simmered dishes.

⑳Shimacho（Large intestine・シマチョウ）
This cut is the cow's large intestine. It has a striped pattern to it ("shima" means stripe in Japanese), which is why it is called "shimacho." It is thicker and tougher than marucho, but there are many people who prefer it due to its unique texture. Shimacho contains large amounts of collagen and is moderately sweet, so it is a very popular cut even in yakiniku restaurants.

㉑Teppo（Rectum・テッポウ）
This cut is the cow's rectum. It is called "teppo" in Japanese because its shape when cut open resembles a gun (also pronounced "teppo"). It is characterized by its rich umami flavors from fattiness and its melt-in-your-mouth texture, and it is often used in stewed dishes.

㉒Tail（テール）
As you would expect, this cut comes from the cow's tail. It is often used in "tail soup." This cut becomes extremely delicious when slowly simmered, which draws out the bone marrow and creates a gelatin-like texture. Tail is extremely collagen-rich, so it can have great results for your skin.

One part that I discovered on my last trip to
japan is Kainomi. May I know which part is that?

This is the part of the flank area around the bottom of the fillet (⑥).
It contains fine fat and is considered valuable in yakiniku restaurants.

Saito san you are too kind, heavens forbid you disappoint a guest on your site that shares so much quality information and knowledge. Unhelpful lol

Thanks for the japanese addendum Saitoさん but I definitely think it was useful even prior to!

Thank you all for your concern!
I just wanted this to be used as meaningfully as possible!

Yet another great article. There are two parts of the beef that I really like. 1. It’s what they called calotte in France or Saeu (새우) in Korea as its shape resembles shrimp. 2. Porter house. I have always wondered if they serve similar cuts in Japan and always curious if they got any name in Japanese.