Maguro (Tuna) -The King of Sushi

When you find good maguro (tuna), the moment you lay eyes on it you want to buy it and turn it into nigiri.
According to Jiro Ono of Sukiyabashi Jiro, this is the "craftsman's spirit" of sushi restaurants.
Whether the price is high or low becomes irrelevant; when a maguro-loving customer shows up, the chef wants to prepare that cut for them to enjoy.
What kind of neta is hon-maguro (bluefin tuna), the so-called king of neta that enchants sushi chefs so much? Here I will be summarizing some basic information on the topic.

High-end sushi restaurants prefer to use tuna caught by fixed net fishing (which is also supported by the president of Japan's #1 tuna monger, "Yamayuki") or pole fishing.
Fixed net fishing sets a net along the path tuna will take and waits for them to get caught rather than attempting to chase after the fish, which makes it a fishing method that causes the least harm to the tuna's body.
"Maguro from fixed net fishing has a good flavor. It has a deeper, more acidic flavor than maguro fished up with other methods, and is simple and delicious. However, the maguro's color is prone to changing easily, so we're careful about the timing with aging it," says a sushi chef who is particular about the maguro he uses.
Pole fishing is the traditional fishing technique in Oma (70% of the tuna caught in Oma is caught by pole), but the quality depends heavily on which fisherman caught the fish; few fishermen can quickly take care of the tuna, whose body temperature has likely risen due to fighting against the fisherman for up to an hour, so that the heat does not adversely affect the quality of the meat.
Incidentally, many say that maguro from tuna caught by longline fishing often looks glossy, but when eaten it has little flavor. On the other hand, its good color can be considered a plus. 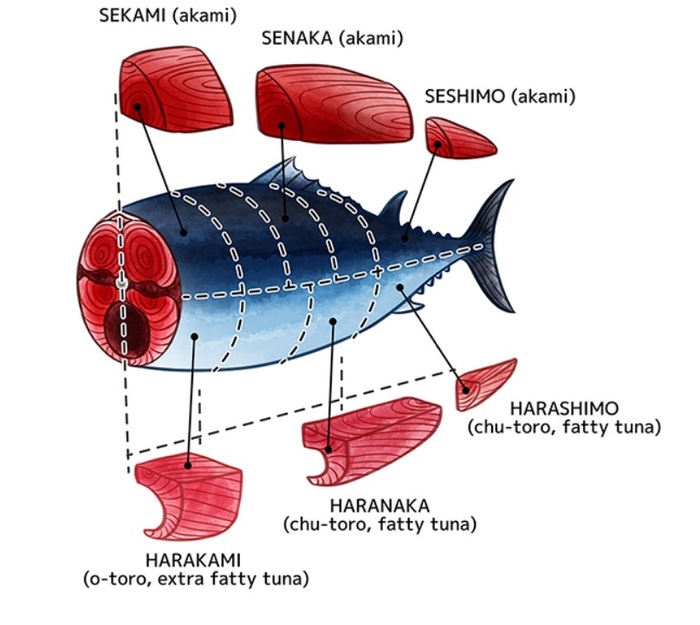 The portion of meat above the tuna's backbone is called "se (back)," while the lower portion is called "hara (belly)."
Furthermore, the section from the tuna's gills to its dorsal fin is called "kami," the center section is called "naka," and the section near the tail is called "shimo."
The cut that is known as "toro" comes from the "hara," or belly, section, and the most prized portion therein is the "harakami."
On the other end is the "akami," or lean meat, which comes from the tuna's "se," or back. The highest quality cuts of akami are from the "senaka" area.
Not only are tuna very large-bodied fish, but they also must be transported for long periods of time, resulting in the "upper section" of the tuna being of higher quality than the "lower section."
These upper and lower sections of the tuna refer to how the tuna's body lays.
The weight of the fish's body is applied to the lower section that rests on the ground, so the freshness level of the tuna may drop due to factors such as the flesh breaking apart, known as "miware."
In reality, the quality difference between the upper and lower sections of tuna can vary, but the "harakami" and "senaka" from the upper section of a tuna are considered the highest quality cuts of the fish.
(The portion of "harakami" that is the closest to the tuna's head is called "harakami ichiban" and is an ultra high class cut)
At sushi restaurants, sometimes the chef will serve their sushi with little information bits, such as "Today's akami comes from Oma."
There is nothing wrong with this in itself, but the price of all maguro from Oma will still vary based on where the cut came from on the fish.
In other words, you can judge the status of these sushi restaurants based on what section this "maguro from Oma" comes from.
For a sushi chef to be able to source the finest "harakami" of the day from a wholesaler, they obviously must be talented, but they also must have the financial sway needed to continue purchasing maguro from that wholesaler.
According to some sushi chefs, it took them 10 years to finally be able to procure the coveted "harakami" from a prominent wholesaler.

Factors that Determine the Quality of Maguro - #1: Color

Color not only refers to the color of the flesh when cut with a knife, but also how long it retains its color.
The color of maguro becomes dull as time passes, eventually even becoming a dark brown.
One of the true charms of maguro is its eye-catching red color when it's served to you at the counter.
This high-quality color is one of the characteristics of tuna caught by fishing, including pole fishing and longline fishing.
On the other hand, supposedly tuna caught in nets, including fixed nets and seine nets, have flesh that lose their color easily and quickly become unusable.

Factors that Determine the Quality of Maguro - #2: Aroma

Tuna is a migratory fish that swims rapidly along the surface of the ocean, much like katsuo (bonito) and saba (mackerel).
They need powerful muscles in order to swim at such high speeds, and so tuna must also circulate blood throughout their whole body to stimulate their muscles, to the point that tuna can practically be considered a mass of blood.
However, the temperature of the tuna's muscles rises as it thrashes about when on a fishing line, resulting in quality deterioration from rapid reactions between the proteins in the muscles and the oxygen within the tuna.
This causes discoloration of the flesh and results in an oxidized odor.
In short, it is important for fishermen to land the fish with as little stress to its body as possible, quickly gut it, and rapidly cool the entire body with ice. If delayed, the tuna's aroma can quickly turn into an odor instead.
Maguro from a properly handled tuna has a slightly acidic flavor and a unique aroma when eaten. This aroma's trailing notes are mellow and long, and it combines with the sour notes of the rice vinegar as it wafts into your nose.
This is a flavor you can only experience from extremely high quality raw hon-maguro (bluefin tuna).

Factors that Determine the Quality of Maguro - #3: Texture

The fat carried in the tuna's flesh is what determines the texture of maguro.
Especially during winter, a cross-section of the "harakami" cut from tuna is so marbled that it looks like a wagyu beef rib roast.
Particularly high-quality maguro has fat with a very low melting point, to the degree that it begins to melt even at just the temperature of the human body.
This is why sushi chefs who are very particular about the meshing of shari and maguro stick fast to the guideline of "shari should be served at body temperature."
Strictly speaking, however, just the maguro's "fat content" is not what is truly important.
For example, farm-raised tuna are fed a protein-rich diet and thus have plenty of fat on them year-round.
However, the quality of this fat makes it heavier compared to that in wild-caught tuna, and as a result you don't find yourself going back for extra pieces.
On the other hand, the fat on wild-caught tuna is extremely fine and quickly melts when put in your mouth, so you find yourself reaching for another bite without thinking.
This is the true depth of wild-caught fish.

Sign Up and enter your Credit Card Information first.

I have heard the quality of tuna has been pretty bad so far in 2021. Will the autumn catches be better?

@guest Unfortunately there is no “tuna forecast” and no one can predict what tuna, or any wild animal, will taste like in the future. It’s nature, after all.

This is a great article, thanks for that. I wanted to ask, how come high end restaurants prefer tuna caught with fixed nets if the fish by this method loses it's high quality color?

Just for knowledge-wise, are you happen to know which restaurant is able to secure the harakami part?

Arai is one. In many shops harakami is saved for regulars.

Saito-san, can i ask whether there is any way to differentiate between farmed tuna and wild tuna?

The difference between wild and farmed tuna is the presence or absence of a fresh sour taste and aroma in akami, and the persistence of fat in toro.

What Sushi restaurants in Tokyo would you say serve the highest quality tuna, with an omakase price of ~¥20-25,000?

Lunch at Sawada would be the best choice.